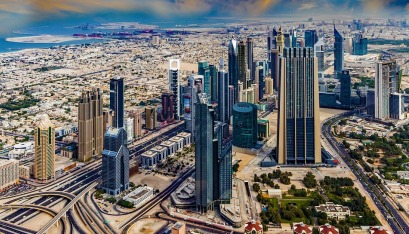 Dubai is the second wealthiest emirate in the UAE, after Abu Dhabi, which is the financial capital state of UAE. Dubai is an important trade and tourist destination, with Jebel Ali, which is the major port in the Middle East. With the introduction of the Dubai International Financial Centre (DIFC) in 2004, Dubai developed as a global hub for service industries such as IT and finance.

Most tourists believe Dubai's revenue comes primarily from oil, but only a moderate amount of oil reserves were used to generate the required infrastructure for trade, manufacturing and tourism in order to build up Dubai's economy. Most of Dubai's GDP (over 95%) is non-oil-based. So far, oil has accounted for less than 1% of Dubai's GDP and tourism to produce 20% of the GDP. These figures explain why Dubai has become a more dynamic and diversified economy in order to survive the decline of fossil fuels.

In the early 1990s, there were only a handful of hotels available for tourists, and Dubai never had high oil revenues like Abu Dhabi. The Burj Al Arab hotel project in 1994 gave hope to the economy as a long-term strategy, an ambition to become the world's top tourist destination. Being one of the favourite tourist destinations in the UAE, Dubai has seen a tremendous change in its economy in the past 60 years.

Some major investments in Dubai have been largely affected due to the recession that hit the global market very badly. Even though Dubai's economy was built on the back of the oil industry, most of the city's banking and financial centres headquartered in the port area and service industries got largely affected as Dubai's property market faced a major downturn during 2008-2009, as a result of the global economic slowdown. During this recession, most of the ongoing projects, along with the jobs of the expatriates, got affected. Also, it was made public that Emaar had approximately $70 billion credits and the state of Dubai an additional $10 billion while holding an estimated $350 billion in real estate assets.

Dubai has also established itself as an international tech hub along with service industries such as Finance and IT. Dubai Internet City, along with Dubai Media City forms the TECOM (Dubai Technology, Electronic Commerce and Media Free Zone Authority), which is an enclave that houses well-known IT firms such as EMC Corporation, Microsoft, Hewlett-Packard, Dell, Oracle Corporation and IBM, and media organisations such as BBC, MBC, CNN, Reuters and Sky News.

With a promising growth rate of 6.1% in 2014, Dubai became one of the fastest-growing economies in the Middle East. Dubai has excellent trade relations with multiple countries. By 2014, Dubai's largest trading partner was identified to be China, followed by India and the U.S.

Tourism has emerged as an important driver of GDP. Dubai welcomed 15.93 million visitors in 2018, retaining its ranking as the fourth most popular destination globally. Dubai has also surfaced as the shopping capital of the Middle East, thanks to its diverse souks, over 100 malls and innumerable shopping centres. Dubai is aptly referred to as the 'City of gold', as the city houses nearly 250 gold shops.

In October 2019, for the first time, Dubai loosened its liquor laws. It allowed tourists to purchase alcohol from state-controlled stores.

Dubai Museum of the Furure